How to learn wing foil?

How to learn wingsurf?

Wing foil, also called wing surf, is certainly the easiest way to ride on the water with a hydrofoil. But to learn and progress quickly, it is still necessary to start in good conditions, with appropriate equipment and following basic recommendations.

Before jumping into the big bath, manipulating the wing on the ground to assimilate the techniques and adjust the position of the hands on the handles or the boom is very useful, and will save you time during your aquatic learning . When navigating, your hands will be in essentially on 2 grips, the handle closest to the leading edge, and a farther grip (usually the 4th handle from the leading edge).

The ideal conditions to start are: a calm water with the least swell possible, relatively deep water, and a sustained wind (at least 15 knots). Contrary to popular belief, to start in low wind around 10 knots, is technical and less suitable, because you need to be effective at pumping with both the wing and the foil. Practitioners who already have a foil approach, whether in sup / foil windfoil or kite foil will necessarily get a benefit. When the wind is strong (15 knots or more), it will be much easier to take off and fly, the wing bringing more power effortlessly and with less technique.

To make the first starts with the wing, it is important to position the board across the wind (perpendicular to the wind axis for neophytes). The wing is placed above the head in lift mode, so it provides support and balance. In this phase the practitioner is on his knees, and it is imperative to position his hands on the wing: for a wing with handles, the front hand is on the most advanced handle (closest to the leading edge), and the rear hand is at least one handle away, or 2 to be able to get power or pump efficiently and able to straighten and start sailing. For those who hold a wing with a boom, you have to think about spreading your hands to generate power by closing the profile. 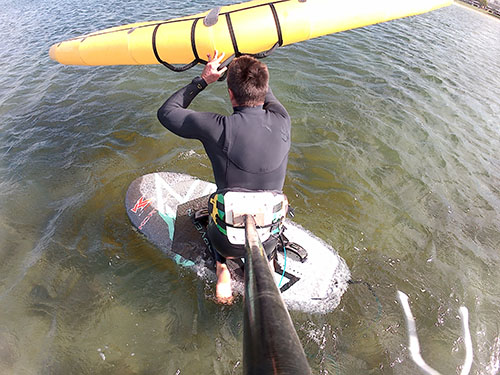 When straightening to start sailing, one leg moves from the kneeling position to a foot rest on the board. Be careful to position the feet in the center of the board, if you have a board with straps inserts, start with the front straps can facilitate placement, otherwise the central inserts are a benchmark for placing feet. The back foot is positioned approximately above the foil mat.

to stand up we take support on the wing, and we put a first foot on the board

Once standing on the board, it is often necessary to tuck the wing, or to pump to generate the power needed for takeoff. The handling of the wing seems very simple, but it requires a minimum of practice to be effective. It is important to keep your front hand a little higher than the back hand, thus giving angle to the wing, it is avoided to send it in the water, which would have the effect of suddenly curbing any momentum! To take off and start flying, pumping with the foil may be necessary, alternating the pressure and lightening phases with the feet to give a ripple movement to the board and lift the foil. If the wind is strong and the handling of the wing is effective, a single blow of pop (dry pressure on the back foot, and lightening of the front foot) can make you take off. 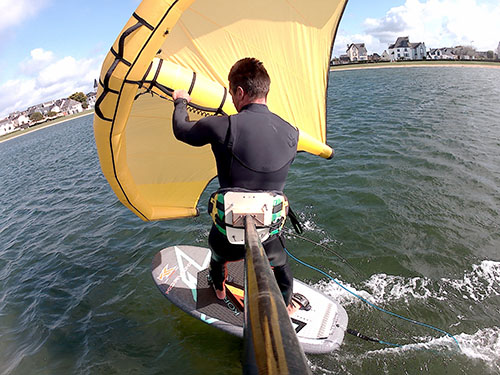 The pop needed to take off and start flying

When the foil is going to take off, people who are used to practicing hydrofoil on other supports should quickly find their marks. For neophytes, it will be necessary to think of leg support before,  and to transfer the weight of the body on the front leg. A simple way to control the first rides is to try to put the board back into the water as soon as you start to take off, the action of wanting to stay in contact with the water while trying to plunge the board, will allow you to find the right supports.

What choice of equipment to start wingfoil?

All these tips to learn the wing surf make sense only if you have a suitable equipment. A beginner will have to chose a large board (between 100 and 140 liters depending on the weight of the rider), preferably with straps inserts. The choice of the foil is also essential, it must be voluminous, but without excess. Foils of more than 2000cm² of surface can seem easy, because stable laterally, but they become technical when you will have speed.

Indeed a foil with large wings will be qualified as “powerful”, it will allow you to take off very quickly, but will quickly become hard to control because it will tend to want to get out of the water and rear up with little speed. In addition, large foils saturate early. In contrast, a foil too small (1500cm² and less), will lack lift to take off and will be more technical in transitions. The right compromise is a foil between 1600cm² and 1900cm² depending on the weight and the experience of the beginner. The size of the mat is also to be taken into account, it is easier to find the balance with a relatively short mast (60 to 70cm), the practitioners who have experience in wind foil, kite foil or surf foil can prefer a longer mast (70 to 80cm).

The surface of the wing is also a parameter to take into account. A small wing is easy to handle, but requires a good technical level to exploit its potential and generate power. Wings of 4m ² or 5m ² seem the most appropriate because they present a good compromise maneuverability / power. There already exists on the market a multitude of brands that offer wings, but contrary to what we can think, there are noticeable performance differences between the different models. The design of a wing is more complex than it seems, so the profile of the wing, the diameter of the inflatable parts, the materials used, the angle of the dihedron, the hollow, are all parameters not to neglect during development, and determine the quality of the wing.

In terms of safety, wearing a helmet and jacket type “impact vest” is strongly recommended. The biggest danger in wing surf is the shock with the foil during falls. Think also to privilege zones of evolution with low frequentation (no swimmers nearby).

To progress quickly in wing foil, it is necessary to master the transitions. Jibes and tackles are the basics to master to be comfortable during your browsing sessions. Do not hesitate to enter your transitions with speed, this speed will allow you to continue to hover during your turns, with this inertia you will be able to put your wing in high position and neutral, and thus have a support without being destabilized. During the transition you can hold the wing with one hand (The front hand) positioned on the handle closest to the leading edge. At the end of the transition it is imperative to invert the positions of the hands, and quickly tuck the wing to stay in flight and start on the opposite side with speed.

Master the trajectories (different speeds), and one of the objectives to be fixed quickly. Knowing how to get up wind and thus being able to orient oneself on the water is essential. To get up wind, it is necessary to be stalled at the planning, then the rotation of the upper body (rotate the bust towards the wind) allows to go up wind.

What complementary practices to progress faster in wing foil?

Wing skate or wing mountainboard (Wing practiced with a skateboard or a mountainboard), are 2 good ways to assimilate the handling of the wing on the ground. Use either a longskate or a surfskate to evolve with your wing. A longskate will be more stable, and more intended for cruising and freeriding. Surf skate is more handy and therefore more oriented freestyle and carving. Choose a well-cleared car park well exposed to the wind.

The sup foil towed behind a boat is another way to discover the ride with a hydrofoil and feel the supports. Similarly surf foil or sup foil in the waves are very interesting approaches and complementary to the practice of wingsurfing. Practicing pumping on a flat water is another way to learn how to handle a foil, and will be very beneficial in your downwind sessions, or in the light wind with your wing.